After a short hiatus due to our reporting of ASNE's end of season spring events, Poem Thursday is back! Please read on to enjoy "Fall Tree of Love" by ASNE poet-athlete Hoang Kong N:

A hot tree like the sun
Bursting light of sunshine
Cars passing that loving tree
Driving through the hearted tree
Earth like fire
Fire in life but no more
Giving life to all
To life of hearts all in one
Posted by AmericaScoresNewEngland at 5:55 AM No comments:

The 12th Annual America SCORES New England Jamboree took place this past Saturday, bringing together over 300 elementary school SCORES participants from all over the city of Boston. In addition to soccer games, SCORES students decorated their own hacky sacks, made beaded bracelets, had their faces painted, and participated in a variety of fun games. Each team brought a display board to showcase at the event that documented their spring service projects and the impact these projects had on their communities. A group of enthusiastic volunteers came from the Boston Thomson Reuters office, bringing with them all of the craft supplies and a team of talented face-painters. A generous donation from Sodexo provided lunch, popcorn, and ice cream to everyone at the Jamboree. The Jamboree marks the conclusion of another fantastic school year of SCORES programming. Thanks to everyone who helped make the event a success!
Facebook Photo Album 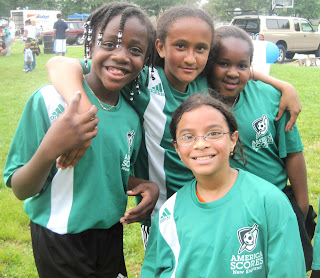 Posted by AmericaScoresNewEngland at 11:30 AM No comments:

Former US Soccer and New England Revolution defender, Alexi Lalas, was featured as the guest speaker on Wednesday evening at the 2010 SCORES Celebration, a silent auction & reception benefiting America SCORES . The annual event drew over a hundred professionals from ’s financial district in support of SCORES programming and to hear Lalas speak.
Lalas, no stranger to either Boston or the America SCORES mission, became a fan favorite with attendees offering predictions and opinions about the upcoming World Cup, for which he is an analyst at ESPN, going so far as to field questions at the conclusion of his presentation.

However, the night was about much more than what will be happening in South Africa over the coming weeks. As he spoke about the America SCORES program, Lalas reiterated the importance of team sports for youth development, detailing what a vital opportunity they are for kids to learn the power of teamwork and also the value of both commitment and dedication. Lalas explained that these are all traits that transcend the soccer field and have an incredible effect both in the classroom and community.

“Growing up, my parents never imagined their son would be a professional soccer player. In fact, in the beginning they didn’t know very much about sports at all. What they did know, however, was that I was passionate about the game and that I was learning lessons on the field that made me a better person off of it. Particularly in the classroom.”

Lalas currently serves on the board for America SCORES Los Angeles and has been involved with the organization at a national level since its inception eleven years ago after an introduction to the program by his mother. 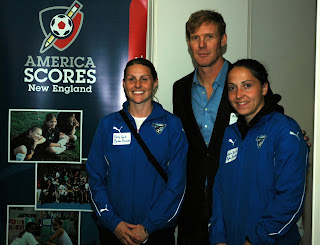 Alexi Lalas with Kelly Smith & Laura Del Rio
of the Boston Breakers
Posted by AmericaScoresNewEngland at 7:05 AM No comments:

She smells like a river of sugar,
Sweet then sour
She is some sort of a show,
Acting.
Her acts are all of a sweet girl
That’s all over the world
Her name is Shelly.
As sweet as can be,
She’s on every TV.
That’s Shelly,
And she’s friends with me.

by Niani Mendes, Grade 5
John Marshall Elementary School
Posted by AmericaScoresNewEngland at 8:36 AM No comments:

Check out what Dimiti Moore, a 5th grader at Mattahunt Elementary, has to say about his experiences at SCORES and what advice he'd give future SCORES' student-athletes.

Posted by AmericaScoresNewEngland at 10:04 AM No comments:

In light of a recent rise in street violence in Boston, we ask that all of our readers and followers listen to the words of ASNE's poet-athletes as they convey how this violence affects their lives as children in our city, and as they propose messages of peace.

Gun Violence and Me

Gun Violence and Me

You and me will never be free
We will never see a day without this violence
Or a day with some peace and silence
There is something we can do
And everything starts with…YOU!!

Hats off to the Henry Grew Elementary School in Hyde Park!

This week’s school spotlight story goes out to the ASNE poet-athletes at the Henry Grew School in Hyde Park, who have raised over $800.00 in proceeds to benefit and promote their student-led initiative Learning Outside the Classroom! The SCORES Students at the Grew creatively raised funds for field trips, performances and other fun activities by hosting two separate “Hat Days, one for students and one for teachers. On these Hat Days, event participants were able to wear a hat during the school day if they paid the $2.00 participation fee, thus allowing students and teachers to break the school’s “no hat” policy for this very special cause.

ASNE poet-athlete Dave was especially pleased with his team’s project because he got to “wear a Rock and Roll hat all day,” and because his team made lots of money. Olive, one of ASNE’s exemplary Coaches stated that the event “was a great success,” and relayed her enthusiasm by telling teachers at other schools to follow her team’s lead. In addition to raising money through Hat Day, ASNE’s poet-athletes also sold snacks and beverages during lunch in order to reach their impressive sum of $850.00.

Both Hat Days and the student’s entrepreneurship during lunch were implemented as part of ASNE’s spring season writing curriculum, Writing for the Community (WFTC). During this 10-week spring session, students at all of ASNE’s schools learn to use writing to affect social change. After studying the power of writing forms such as political poetry, letters for a cause, newspaper articles, petitions, and comics, our poet-athletes use these forms to write on behalf of their own causes. For ASNE’s poet-athletes at the Henry Grew School, where America SCORES is the only afterschool program in operation, this cause was to ensure that all Grew students were able to participate in fun activities both during school and afterschool, designating the SCORES students as both leaders and advocates for their peers.

Next up for ASNE’s poet-athletes at the Grew is ASNE’s Jamboree! year-end festival, where all of ASNE’s elementary school participants will display poster boards that document the impact they had on their respective communities as a testament to the combined impact of each SCORES team’s work. This years Jamboree! will take place on Saturday, June 5th at the Franklin Park Playstead.
Posted by AmericaScoresNewEngland at 9:18 AM No comments:

The mission of America SCORES is to empower students in urban communities using soccer, writing, creative expression, and service-learning. With teamwork as the unifying value, SCORES inspires youth to lead healthy lifestyles, to be engaged students, and to become agents of change in their communities. To learn more, check out the America SCORES New England website.

For Email Marketing you can trust